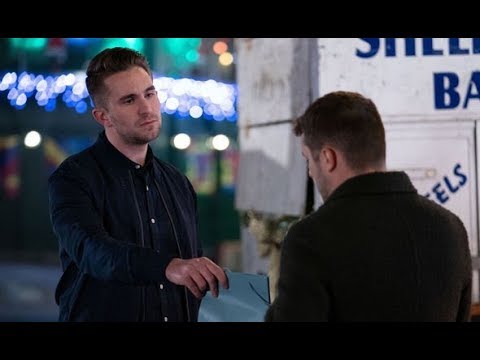 Whitney Dean (played by Shona McGarty) has had a rough time recently in EastEnders after discovering her new boyfriend, Leo King (Tom Wells) was in fact the son of her former abuser and he intended on holding her hostage until she admitted she had lied about her abuse. Meanwhile, Callum Highway (Tony Clay) has had to walk away from his blossoming relationship with Ben Mitchell (Max Bowden) when the bad boy revealed he no longer wanted to be with him. In tonight’s episode of the BBC soap, Callum explained to his former fiancée why they are more similar than she may have thought.  Callum said: “Jack reckons it’s down to to whether Leo wants to press charges if he does then I can say goodbye to my career in the police.”  “I’ve never seen you like that before is that about Ben,” Whitney remarked.  “No one ever listens to people like us we get walked all over and I’m sick of it,” Callum hit back.   READ MORE EastEnders spoilers: Martin Fowler’s hit and run victim identified?  “I think you’re right I think I’m going to take a stand,” Whitney agreed. Later on, Callum made it clear he wasn’t going to be around for Christmas and told his brother not to expect him for dinner.  The heartbroken lad revealed he was planning on spending the day with an old Army friend. However he later admitted to Ben he actually has no plans for Christmas and just wants to get away from Walford.   “Do you remember when you called me a coward well the shoe’s on the other foot now you are scared plain and simple you are scared of falling in love,” Callum told Ben.  When asked where he was going, Callum confessed: “I don’t know yet head to the station and follow my feet be spontaneous for once.” “Should I bother coming back?” he asked the Mitchell bad boy.  “Not on my account,” Ben hit back.   “Can’t run away from your feelings forever Ben,” Callum remarked.  While Callum prepared to leave Walford, Whitney met with Leo to plead with him not to press charges on Callum for assaulting him but she was shocked by what he had to say.  Leo confessed: “I believe you everything you said in the hotel it makes sense after I left that day I walked around for hours feeling lost.  “But I realise I’m not alone you get it too Whitney, you understand what it’s like to love him to still love him even though he was what he was.” Trending READ MORE EastEnders spoilers: Ben Mitchell and Callum reunited by Pam Coker?  Leo revealed he wouldn’t press charges before adding: “I don’t want to hurt you I just want to be close to you.” “Look Leo this is all in the past I’m sorry but I can’t help you,” Whitney remarked.  “Stay away from me,” she added before turning to walk away.  “But I love you,” Leo revealed leaving Whitney gobsmacked.  With Callum feeling like he doesn’t have anything to stay in Walford for, could Whitney decide she wants a clean break too and join him?  EastEnders continues Christmas Day on BBC One at 9.30pm.